⚡ Before you start Make sure you have correctly integrated the ironSource SDK into your application. Integration is outlined here.

As part of ironSource SDK 7.2.3.1 you can use a new set of listeners to get more data in ad callbacks, including network, segment, and A/B indication.

You can view the full listeners implementation here.

Important! When using these delegates, we recommend you unregister from any other interstitial delegates, to avoid any data duplications.

We recommend requesting an Interstitial Ad a short while before you plan on showing it to your users as the loading process can take some time. We don’t recommend making consecutive requests for an interstitial ad in a short timespan. Numerous requests in a short period of time have no added value as the chance of available inventory within this time is unlikely.

To request an interstitial ad, call the following method:

Note: If you’d like to serve several Interstitial Ads in your application, you must repeat this step after you’ve shown and closed the previous Interstitial Ad. Once the interstitialDidClose function is fired, you will be able to load a new Interstitial ad.

After you call the loadInterstitial in Step 2, you will be notified when the ad is loaded through the delegate with the method interstitialDidLoad.

Alternatively, you can request the ad availability directly by calling the following function and it will return a true or false boolean:

Once you receive the interstitialDidLoad callback, you are ready to show an Interstitial Ad to your users. To provide the best experience for your users, make sure to pause any game action, including audio, during the time the ad is displayed.

Invoke the following method to serve an Interstitial ad to your users:

If you’ve set up placements for your Interstitial, call the following method to serve an Interstitial ad in a specific placement:

Important! Once you’ve successfully completed step 5, you will have shown your user an Interstitial Ad. In the case you want to serve another Interstitial ad, you must repeat Step 2 to request an additional Interstitial.

If this is a new integration for your application, your app will by default be in ‘Test Mode‘ on your ironSource dashboard. While your app is in Test Mode, the ironSource SDK will print more logs to the console in order to provide greater visibility into the SDK processes. To test your ad inventory, set up your Test Devices. Until you turn on live ad inventory, you will receive test campaigns that don’t generate revenue. Make sure to select ‘Go Live!‘ on the Ad Units page when your app is ready for live ad inventory. 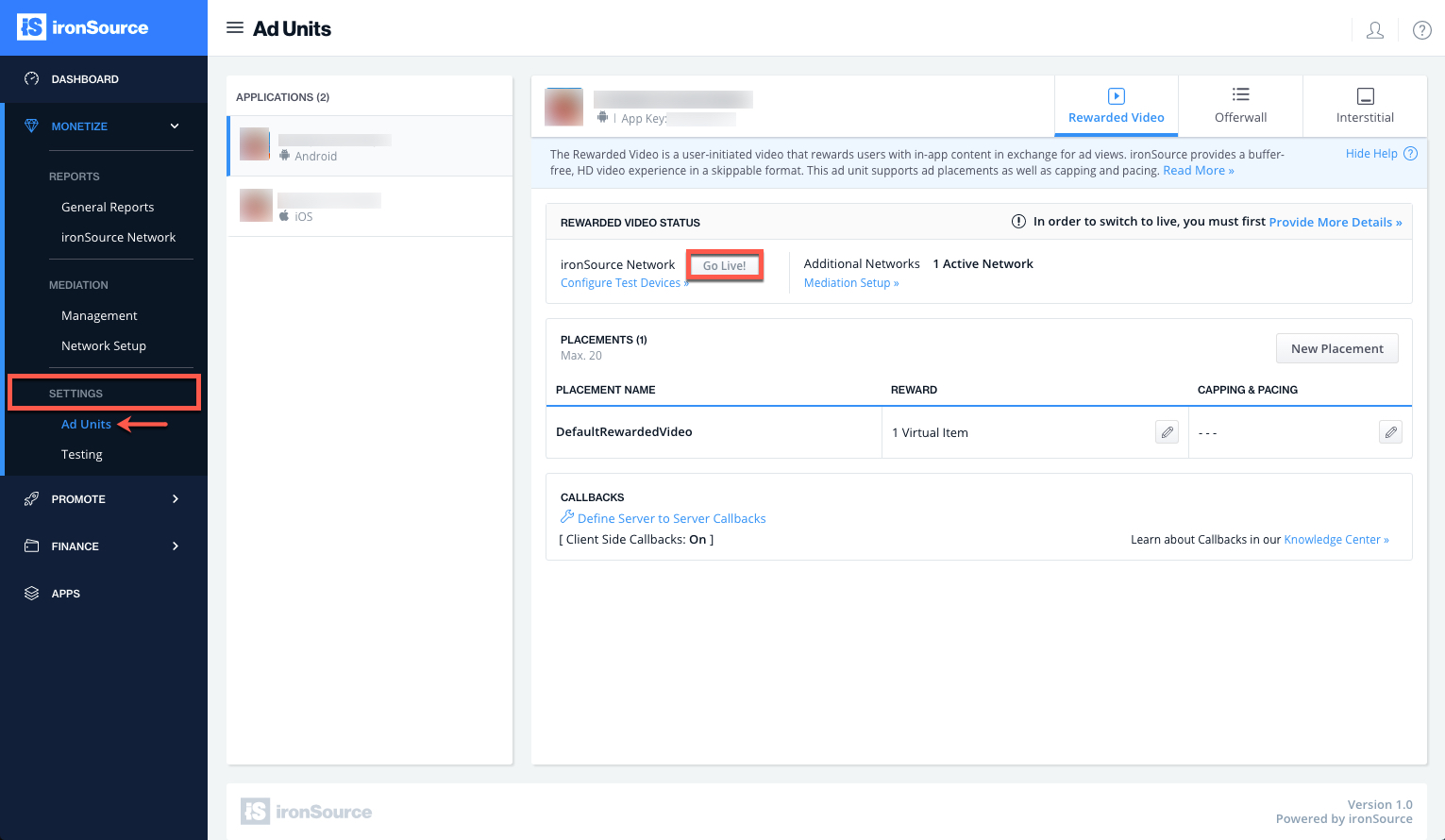