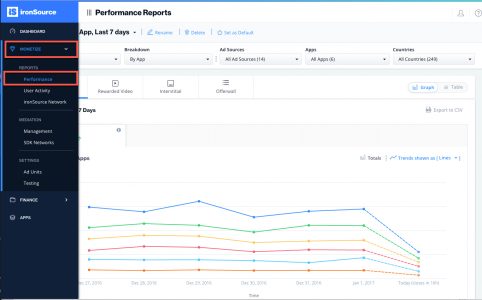 If you have saved reports in the past, you can find them in the dropdown accessible in the Report Title. 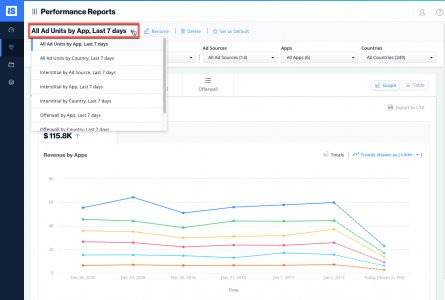 Date Range, breakdowns and filters can be found at the top of the page. Use these to deep dive into your app’s performance and better understand your ad activity. These filters make it easier to find specific results and separate the rest of the data to simplify the report.

Breakdowns can be found on the right side of the graph. Use these to create different views of your data based on the selections you’ve chosen in the filters section. Customize the view even further by selecting how the list is sorted, as well as the checkboxes which control what you see in the graph.

The available breakdowns are:

* ATT status breakdowns enable you to analyze the impact of ATT permissions on your performance. This is relevant only for iOS apps and is available with ironSource SDK 7.1.0+

ATT status is broken down into 4 values:

You can examine your reports for all ad units in the Overview tab or for to view each ad unit separately simply navigate between the tabs. 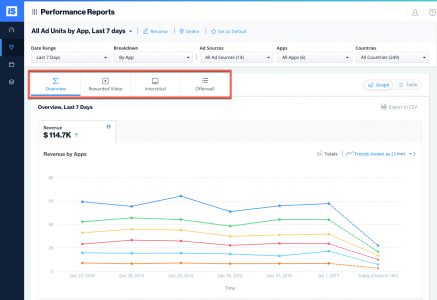 You can view your reports in two different formats: Graph and Table. Click on the separate metrics to see dedicated graphs for that metric. You can create custom metric sets in the individual ad unit tabs that provide granular data on your ad performance, by clicking Customize Metrics. You will then be able to create your own metric set and save it for future use. You can change the metrics for your ‘Default Metric Set‘ or add a new metric set. Your metric sets will be saved per ad unit.

When adding a new metric set, enter a relevant name for the metric set and choose from the list (find a list of all our supported metrics below). Then click ‘Save‘.

ironSource provides deep insights into your app’s ad performance with a wide range of metrics.  These advanced metrics allow you to understand how well your ad units are performing, which ad source is proving most profitable, etc.; allowing for better implementation and control.

Revenue-based metrics like ARPDAU and eCPM are supported for every breakdown.

Note:  Supported metrics might differ slightly based on the ad unit.

Revenue: The total revenue generated by your ad performance
eCPM: Effective Cost per Thousand Impressions. Calculation: revenue divided by impressions multiplied by 1000
Fill Rate: The rate at which an ad is served following a request to the Mediation layer; calculated as ad fulfillment divided by ad requests multiplied by 100%
Requests: Number of times an ad request has been conveyed to the Mediation layer. The request numbers for individual ad networks will differ if/when breaking down or filtering by ad source
Impressions: Total number of times the ad is shown
Completions: The total number of video completions
Completion Rate:The rate at which an impression is followed by completion NEW!
Fulfillments: The number of requests that generated a positive response
ARPC: Average Revenue per Completion, the total revenue divided by the number of completions
Imp/ Ful: Impressions per Fulfillment, the total of impressions divided by the total number of fulfillments
Source Ad-Availability Check: The number of times an ad source is asked whether it is ready to show an ad
Source Ad-Availability Response: The number of times an ad source had an ad available to show at the time of the request
Availability Rate: The rate at which an ad source had an ad available when an ad was requested.
Sessions: The sum of single periods of user interaction with your app (each SDK init generates a new session).
Engaged Sessions: The sum of sessions in which a user interacts with an ad
Imp / Session: Impressions per Session, The average amount of ads served throughout a single session
Imp / Engaged Sessions: Impressions per Engaged Session, The average amount of ad impressions during an engaged session

Once you save your metric set, you will be able to see it in the Metric drop-down on the top right of the graph.

For relevant metrics, you will have the ability to view the data trends in lines or stacked: 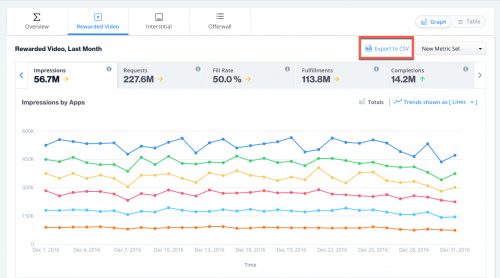 The following window will open and you can verify your breakdowns and metrics (KPIs). Make sure the Date Range is correct. Click ‘Download CSV’ and the file will download to your computer. 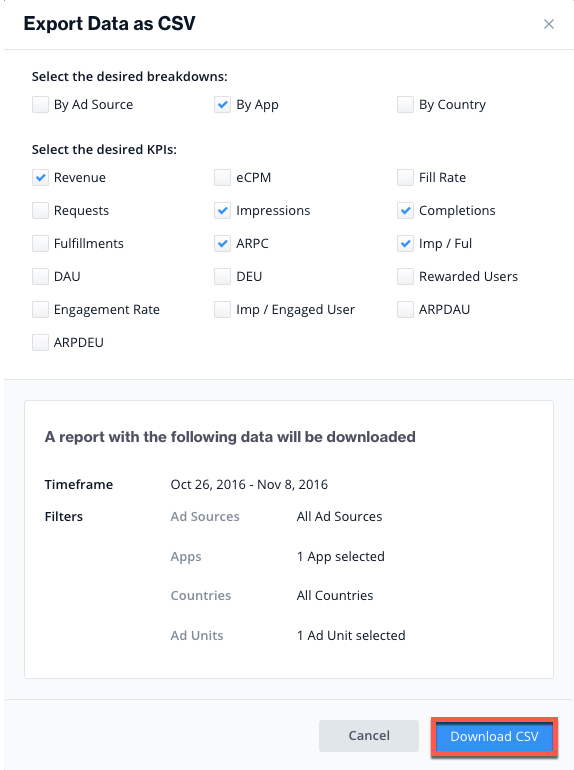 Make sure to check out your User Activity Reports to gain valuable insights on how your users interact with your ads.